Seborrheic dermatitis (SD) is characterized by redness covered with large, yellow, greasy scales that can diffusively involve the scalp. SD can be associated with telogen effluvium and can extend into non-hair bearing areas like the forehead, behind the ears, and the posterior neck. One can see a common finding of a crusted fissure that can extend up behind the ear into the scalp. Scaling and redness can also be located in the beard, external ear canal, smile lines, glabella (the area between the eyes), chest, and groin, i.e., in areas with increased oil production.

Seborrheic dermatitis appears to be androgen dependent and may occur in infancy but reappears in adolescence and adulthood with the rise of oil production during those years. Individuals with Parkinson’s have a high sebum production and have a greater incidence of SD, which can be treated with levodopa therapy. Certain neurological conditions (stroke, head trauma, and epilepsy) can also be associated a higher rate of SD, possibly via production of a sebotrophic factor. 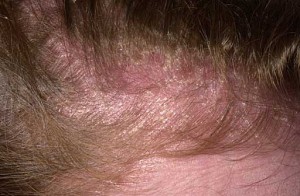 In 1874, Malessez found that the yeast Pityrosporum may be implicated in dandruff. Today, Pityrosporum has been reclassified into 7 species of Malessezia, which is found to be present in SD lesions. The abnormality appears to lie in the stratum corneum of the skin with poor adhesion of keratinocytes from excess lipid and infiltration by Malessezia. AIDS patients who suffer from SD more commonly show a much larger infiltration of Malessezia than others do. Histologically, SD appears somewhere between chronic eczema and psoriasis with hyperproliferation of the epidermis and other skin changes.

Treatment of SD is directed at scale reduction and reduction of Malessezia. Tar shampoos can reduce epidermal proliferation and scale formation. Salicylic acid may have similar benefits for the scalp. Zinc pyrithione, salicylic acid, sulfur, and selenium sulfide also help with reducing the fungus. An alternating regimen of medicated shampoos can help facilitate eradication of the fungus more effectively and increase tolerance to the shampoo. It appears that the frequency of shampooing plays a greater role in treatment of SD than the time that the shampoo is left in contact with the scalp. Following shampoo, a topical corticosteroid can be used daily or every other day until scalp redness has subsided. Only if a secondary bacterial infection is noted should antibiotics be added. Topical creams like 2% ketoconazole can also be helpful when applied daily with 79% of patients responding after a 10-day course.

Psoriasis affects about 1 to 3% of individuals in the world. It is thought to be genetically linked but may be brought on by mechanical trauma, infections, certain drugs, stress, etc. The presence of Malessezia can trigger psoriasis in the scalp in the patient susceptible to psoriasis.

The scalp is the site where 50% of individuals exhibit psoriasis. It begins as small, red papules that may lead to lesions with thick, silvery scales that may cover the entire scalp. The degree of inflammation may be worse than in seborrheic dermatitis. Thick scales can force a funneling of hairs together to create a “teepee sign”. Hairs can look lusterless and dry and break easily. Hairs can be lost through a conversion of anagen to telogen as well. Generally, the hair loss is reversible unless there is an associated folliculitis that is long standing. Education is a vital part of treatment in psoriasis that the disease process cannot be removed but only controlled. Long-term remissions are possible as well. Like SD, treatment involves removal of the scale and treatment of the underlying skin. Soaking the scalp or wrapping it with hot towels can help loosen the scales for removal.

After scales are removed, a shampoo that contains fluorinated topical corticosteroid can be used to treat the red, hard, and itchy areas. Grenz rays can be used which are a type of soft x-ray that can help as well as UVA and UVB lights with or without psoralen (PUVA). Calcipotriol can be used topically to limit the hyperproliferation seen in psoriasis. In difficult to treat plaques, injectable steroids may have to be used and can work well in these plaques. If one thinks that Malessezia is the inciting agent, then oral ketokonazole 200 mg daily can be used as well.

Pityriasis amiantacea (PA) is easily recognized as local areas with thick, asbestos-like sticky scales and temporary loss of hair. The silvery scales can overlap like tiles on a roof and attach to the hair shaft. The scalp may also be red and moist. Most commonly, PA affects young girls who may present with fissuring behind one or both ears extending into the scalp. Treatment involves frequent shampooing using alternating tar and non-tar shampoos. Salicylic acid is used to loosen the scales a few hours before shampooing.